"The lines have fallen unto me in pleasant places; yea, I have a goodly heritage." Psalm 16:6

In 1958, God led a small group of Christians with a vision for Christian education to found Augusta Christian School. It opened that first year with one teacher and a kindergarten class of 8 students.

After meeting for three years at Druid Park Church, the school moved to a facility on Golden Camp Road and was incorporated that same year. By 1972 there were 334 students in grades K-8.

Seeming tragedy struck when a fire devastated the facilities on Golden Camp Road. God's faithfulness was very evident in the provision of 26 acres of property on Baston Road in Martinez.

The year 1978 was highlighted by the joyful occasion of the first graduating class of ACS. The next few years were marked with the building of the athletic complex, including the gym and football field. In 1981, ACS was accredited by the Georgia Accrediting Commission. As enrollment increased a high school building was constructed in 1983 with the extension the following year. The School of Talent Development was founded in 1990 to service students with learning differences and has become a vital part of Augusta Christian's mission to reach the needs of many families through Christ-centered education. In 1996 the early childhood center was converted into a beautiful Fine Arts Center and was named after one of the school's founders, Mr. Charles B. Whitney, Sr. Our football and baseball fields were developed over a period of years and now include new bleachers.

God's faithfulness has been apparent in not only providing property, but by providing quality personnel who are committed to Jesus Christ as well as to Augusta Christian School. It is the continued purpose of ACS to honor Jesus Christ, believing that an education in which Christ is central will influence the entire course of a student's life.

The school is incorporated as an educational, non-profit organization. The corporation operates under the direction of a Board of Directors. The Board determines policy, ensures that the vision, philosophy and objectives of the school are maintained, and ensures fiscal stability. The Board is committed to a relationship with home, church, and school in the growth and development of the child. 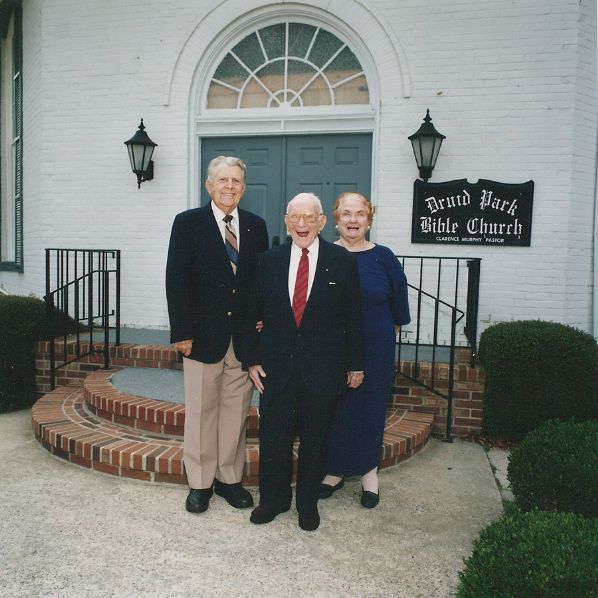 Our Founders at the original school site: Druid Park Church. From left, Mr. Jennings Murphy, Mr. Charles B. Whitney, Sr and Miss Leila Havird. All of our Founders are with the Lord, and we are very thankful for the rich heritage they have passed on to the Augusta Christian School community.